newsopinionpatch
Patch 1.2 and a change in Philosophy
By rokman on December 28th, 2018

Right off the bat, I am floored by these changes. In a Game Informer interview, Artifact Developers had this to say about nerfing and buffing cards --
Jeep Barnett: We have a long history of partnering with our community and making sure we’re building the thing that best serves that community.
Skaff Elias: Our intention is to update it primarily releasing new cards.
Richard Garfield: It’s worth noting there that we will nerf and buff cards at an absolute minimum. We probably would never buff a card.
Skaff Elias: There’s never a reason to buff a card.
Richard Garfield: The only reason to nerf a card is in the unlikely situation where everyone has to play this card or they’ll lose. We would rather let the metagame play out and if a card is a problem, it’s going to go away anyway.
I couldn't believe it, Valve really changed their opinion on this subject. They nerfed three of the most powerful cards in Artifact (you're next !) and they buffed some underplayed heroes and an item no one played in Constructed! These changes really refreshed the meta, blowing up the meta decks, obliterating Blue/Green Combo, and making players re-think their deck lists...
But not everyone is happy. While many have joked about the "Axecoin market", there likely are a few players out there that wanted to treat Artifact like a digital Magic: The Gathering, hoarding cards to sell at a later date, possibly after a set "rotates out" and can't be bought anymore, which is what many speculate could happen.
However, Valve has responded fairly, offering a Buyback program, allowing players to sell back the cards impacted by the balance adjustments. Each card can be sold back to Valve at its highest price point within a 24 hour window prior to the patch. will get you $9.98 and will get you $7.18. Not quite what they were worth on Launch day, but slightly better than their current value.

What does this mean for the Constructed Meta?

The 1.2 Patch actually landed during the TakeTV SeatStory Cup X tournament, during the group stages. The first day was played with Patch 1.1 Decks, while the second was played with 1.2 Decks, mere hours after the Patch hit. Players had to guess what the meta would develop into and what would be the best decks to play. It did make for quite an exciting tournament, watching the meta evolve right in front of us.
Many have shared their opinions on the meta, often claiming that Mono Blue decks are overpowered. This was true for the first few days of the 1.2 Patch, for a few reasons... Let's talk item decks!
In the beginning, players were running multiple in their item decks. For its cost, and its value over time, it is purely the best health item in the game, no questions. But then enough people figured out Blue/Green Combo decks, and were replacing with . See, really puts a strain on the Blue/Green Combo deck, and it was a necessary card to run, just to stand a chance in the matchup. This is when the 1.2 Patch hit.
People kept in their decks for quite some time, which really doesn't do enough versus Mono Blue. But you know what card really hurts Mono Blue? . With enough Health points, Mono Blue can't use cards like , , , and for easy removal. The only way their deck can deal with a board full of massive health Heroes is . And they only have 3 of those in the deck. So now, many players are going back to in their item decks, for the better.
Is Mono Blue overpowered? In my opinion, no, but it is one of the best decks in the game, right now. It can be managed with early gold into multiple and using "Get Initiative" cards to remove the enemy Blue Heroes, before they can cast anything.
Red/Green decks, however, have taken quite the hit in viability. Green, in general, is now the weakest color in my opinion. and were kind of the only reason to run Green. Right now, Green is only good for Ramping up Mana and , which is an absolute unit of a card, but I don't think it's good enough to skip out on the other colors.

An often requested feature, some sort of Progression system, has finally made its way into Artifact. After a week's time of using the system and chugging along, I've finally settled on an opinion. While it is great for the overall community, because it's what people asked for, I think it's kind of a band-aid system, in its current state, as if it were slapped together to just make people happy.
In the future, I hope Valve expands on this system significantly, giving players a real "Profile Page" in the game, where all of their progression can be tracked and viewed by other players.
As for the free Packs and Event tickets, again, this is something that the community wanted and probably needed. In today's world, gamers are so used to the carrot-on-the-stick type of rewards, to make them feel like compelled to continue playing a game. This is just what gamers want, and overall, it's not a big deal, let them have it, if it's what makes them happy. 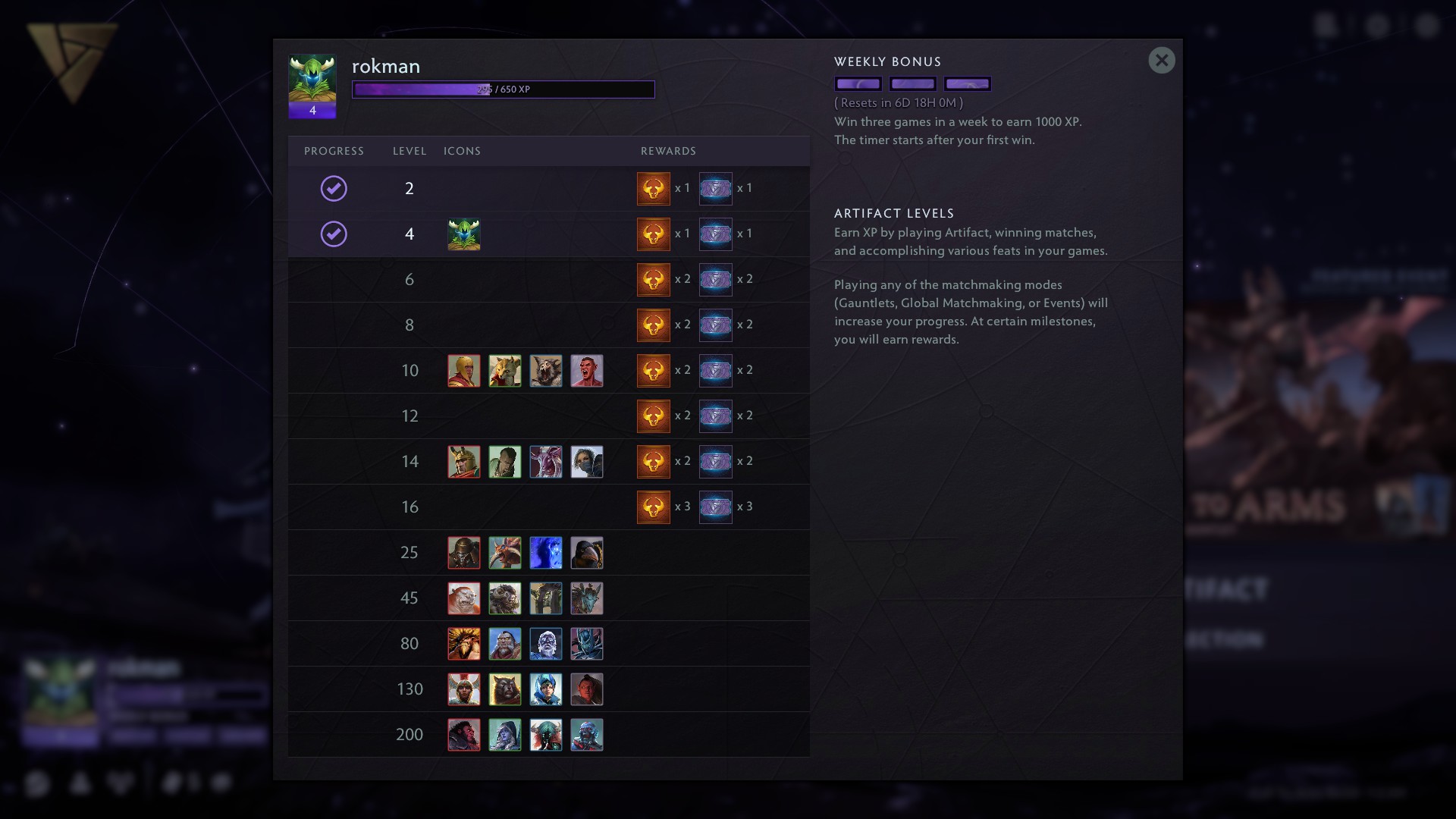 For both Constructed and Draft game modes, players start at Rank 1, gaining ranks up to a maximum of 75, after they accumulate enough wins. Again, this feels like a band-aid system. The icons for the rank don't change the higher you get, there isn't anyway for you to display your rank to the world, so then what even is the point?
This is absolutely something that needs to be improved upon in the future. As Valve has already stated, they don't want a Ladder or traditional MMR system in Artifact, but it is something players want. Valve seems to be listening to what players want, by nerfing cards, and giving them free stuff for playing, but maybe this is the next thing Valve needs to change their stance on? 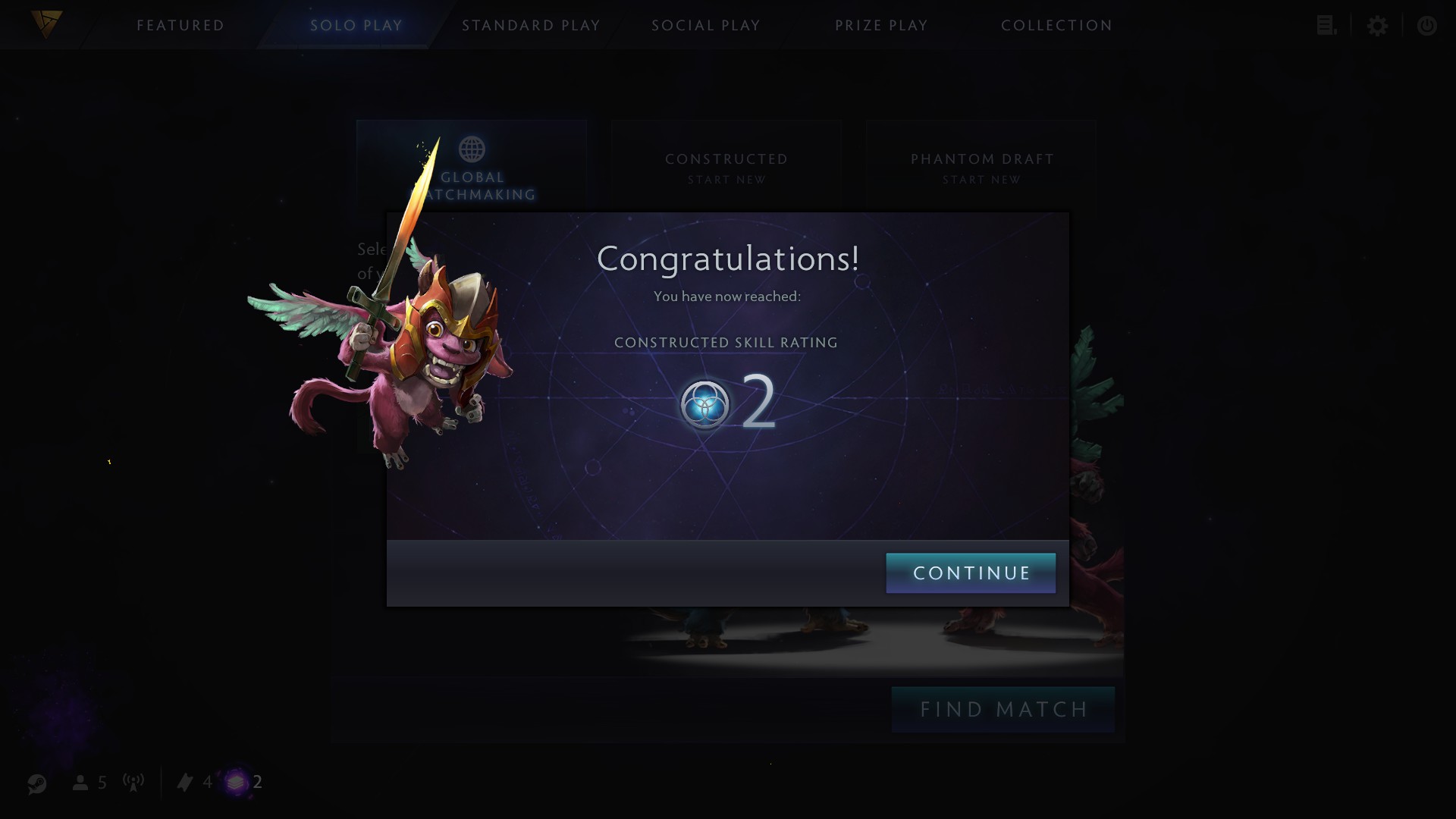 Did this Patch "save" Artifact?

Yes, and no.
The Twitch numbers haven't improved. Sullygnome shows that in the last 7 days, Artifact is the 52nd most watched game on Twitch, which isn't very good. And to add to that, TakeTV did host the SeatStory Cup in that time, which likely had a positive effect on the Twitch viewership. If that tournament hadn't taken place, how far down the list would Artifact have been?
Concurrent player numbers have increased, but not by much. Steamcharts shows that Artifact gained a few thousand players per day, on average. Which is a positive thing, but still not a massive margin. It'll take a lot more than just a single patch to get thousands of players to leave Hearthstone and Magic: The Gathering Arena to come over to Artifact.
So then, how exactly did this patch save Artifact? First, Valve has shown us, quite drastically, that they are listening to us players. Everyone was complaining about online. They actually blew the card up, just look at the image on the blog post -- It's exploding! Valve wants Artifact to be popular, Valve wants us players to enjoy the game to its fullest potential, and lastly, Valve has shown us that they are willing to change their stance on something, if it's going to improve the game.
Thanks for reading! You can follow Artibuff on twitter @Artibuff and you can follow me @rokmanfilms! Starfox72 [FR]Posted 3 years ago
Thank you for your dead-on analysis. Wishing for more articles. Personally, I'm tired of fighting red/black decks. I think hope they nerf the red heroes a bit more as well as that persky blue "destruction" card.
This comment was edited by Starfox72 [FR] 3 years ago